Video of the Occupy Bernal Fiesta by selene video

What: A family-friendly street party and the Good Neighbor Awards.

Where: Andover Street between Cortland and Ellert

Occupy Bernal is proud to have helped prevent the evictions of some of our neighbors! To show appreciation for the hard work and perseverance of Bernal locals, we’re throwing a “foreclosure fighter” fiesta.

In addition to hobnobbing with our neighbors; still in their homes no thanks to the banks:

– see Occupy Bernal instigator Beth Stephens and artist/activist Annie Sprinkle hand out the awards to neighbors whose homes are in foreclosure and who are fighting to stop predatory bank practices.

To sign up for the Occupy Bernal press list and/or obtain photos and video of the event, see http://www.occupybernal.org/press 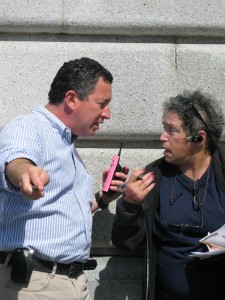 Thanks to Peter Menchini for the great video of the Occupy the Auctions Dance Party action below:

UPDATE as of the morning of April 27, 2012: Wells Fargo has postponed the auction of Eric and John’s home, so we are going ahead as planned with celebrating by dancing away the other foreclosure auctions scheduled for today.

At 1:45pm this Friday, April 27, please come to an Occupy the Auction Dance Party to stop Wells Fargo from auctioning off the home of Eric and his partner John. 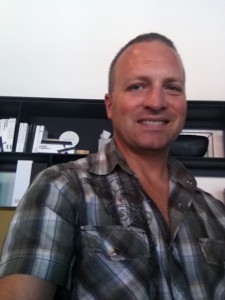 Eric and John live in Bernal and Eric is a Foreclosure and Eviction Fighter and active member of Occupy Bernal. They went through a difficult financial time, but are now both employed and have the funds to make regular payments on a renegotiated loan, which Wells Fargo has refused to provide.

Please arrive on time and bring loud whistles and earplugs.

The action will go ahead as a celebration even if the bank postpones Eric and John’s auction.

Video outside Wells Fargo Shareholder meeting with event invite (thanks to Carol Harvey):

San Francisco, April 27, 2012 – San Francisco Occupy activists and supporters invited the 99% to attend an Occupy the Auction Dance Party at 1:45pm today at City Hall. Occupy Bernal, the Alliance of Californians for Community Empowerment (ACCE), and the Occupy SF Housing Coalition will celebrate Wells Fargo’s postponement of the auction of the home of Bernal neighbor Eric and his partner John by dancing away the remaining foreclosure auctions taking place on City Hall steps tomorrow.

“Wells Fargo Bank postponed the auction of our home, but my partner and I are still living with the looming threat that they will sell our home out from under us,” said Occupy Bernal Foreclosure and Eviction Fighter Eric L. “We went through some tough times, but now we can afford to pay if the bank will just negotiate for us and all those who are seeking a fair deal to stay in their homes.”

“The banks continue selling off the homes of San Franciscans every weekday despite the San Francisco Board of Supervisors’ passage of a foreclosure moratorium resolution and the Mayor’s request for a pause in bank foreclosures,” said ACCE Foreclosure and Eviction Fighter Vivian Richardson. “Let’s tell the predatory banks we need a fair deal for every home owner and renter in San Francisco.”

Occupy Bernal, ACCE, and other community organizations in the Occupy SF Housing Coalition have organized an Occupy the Auctions/Evictions direct action campaign to invite the 99% to halt the dozens of foreclosure auctions that take place on City Hall steps each weekday.

An audit commissioned by San Francisco Assessor-Recorder Phil Ting on nearly 400 San Francisco foreclosures over the past three years reveals that “fully 84 percent of the foreclosure files contained at least one clear legal violation and more than 66 percent of the files contained multiple violations”. This report confirms what many have suspected and provides the evidence required for issuing a moratorium on all predatory or for-profit evictions, foreclosures, and foreclosure auctions until such time as the law violations mentioned in the report are resolved and mechanisms are put in place to prevent further bank abuses of homeowners and renters.

The recent deal between banks and the Attorneys General of 49 of 50 states is woefully inadequate and does little for the Californians hardest hit by the crisis. Foreclosures have cost the state $650 billion in lost home values, property taxes, and foreclosure-related costs, according to a report released last December by California Reinvestment Coalition (CRC) and the Alliance of Californians for Community Empowerment (ACCE). The top banks – Wells Fargo, Bank of America, JPMorgan Chase, Citigroup, and Ally Financial – pay only $18 billion in this sweetheart deal, which amounts to only $150 per foreclosure statewide. About 750,000 families will receive up to $2,000, a pittance compared with even the depressed value of their homes. The largest chunk – more than $12 billion – will in part go to pressure even more homeowners to sell their homes for less than what they owe, in real estate transactions called short sales that are nothing more than an easy way for banks to make money and save time evicting homeowners, while leaving more and more neighbors without homes. To summarize, the 1% are profiting off the economic distress of the 99% to finagle the largest land grab since the Depression era or earlier.

In a city that has seen 12,000 or more foreclosures in the past three years, Occupy Bernal started organizing in December 2011 to stop the evictions and foreclosures of our neighbors, joining a community of housing rights organizations who have long been fighting for tenant’s and home owners’ rights. In response to public protest in January 2012, Wells Fargo Bank postponed auctions of the Bernal homes of Washington and Maria Davila and the Alberto Del Rio family, but the bank also rescheduled the auctions. Despite meeting with six foreclosure fighters from the Bernal Heights neighborhood and another from Bayview-Hunters Point, Wells Fargo executives have refused to allow any to refinance their homes or modify their loans, and have continued plans to sell off their homes.

This Occupy the Auctions action follows on successful protests that protested the Wells Fargo Shareholder Meeting on April 24, 2012, occupied the home of Wells Fargo CEO John Stumpf on February 25, 2012, and shut down Wells Fargo headquarters on January 20, 2012, and Wells Fargo bank branches in the Bernal, Excelsior, and Noe Valley neighborhoods on January 5, January 7, and March 24 respectively.

To sign up for the Occupy Bernal press list and/or obtain photos and video of the actions, see http://www.occupybernal.org/press

Occupy Bernal is a neighborhood-based Occupy currently focusing on preventing the banks from throwing our neighbors out of their homes. Web: http://www.occupybernal.org

Alliance of Californians for Community Empowerment (ACCE) is raising up the voices of low income, immigrant and working families across California. Web: http://www.calorganize.org

Occupy SF Housing is a coalition which includes OccupySF, SF Tenants Union, Housing Rights Committee of SF, Causa Justa :: Just Cause, Eviction Defense Collaborative, ACCE, Homes Not Jails, Occupy Bernal, and other community groups and individuals. The coalition came together to stop banks from evicting tenants and homeowners through foreclosures or through their partnerships with real estate speculators. Web: http://www.occupysfhousing.org