Update as of September 12: Good news! After the television coverage and news coverage of Sally’s case, the judge delayed the eviction of the Scott family with the help of Sally’s attorney. Sally, her husband Bob, and supporters from MORE attended the proceedings. That gives us time to pressure Freddie Mac to rescind the eviction and allow negotiations for a fair deal loan modification so the Scott family can remain in their home. 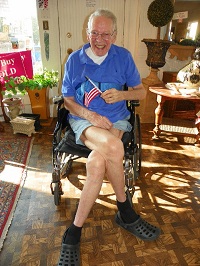 St Louis, Missouri – Pleas to stop the eviction of Sally Scott, her disabled veteran husband Bob, and their mentally challenged daughter Susie, have fallen on deaf ears at Freddie Mac.

“After my 84-year-old husband suffered a stroke, I was ashamed to admit that we missed some mortgage payments while closing down my husband’s business and covering skyrocketing medical costs,” said Sally Scott. “Now I know that the right course of action is to fight for my family and our home by demanding that Freddie Mac work with Select Portfolio Servicing to stop our eviction and offer us a fair deal loan modification.”

The Scotts originally obtained their loan from Southwest Bank, then it was transferred twice over the last 11 years, ending up serviced by Select Portfolio Servicing and owned by Freddie Mac.

The following Freddie Mac staff and attorneys have refused to negotiate on the case when approached by Sally Scott and her supporters:

After their staff refused a loan modification approved by a HUD-certified counselor, Freddie Mac auctioned back to themselves the home of 65-year-old Sally Scott and her family in west St. Louis, Missouri.

Her 84-year-old husband Bob is a WWII and Korean War veteran who was disabled by a stroke five years ago. Sally, her disabled husband Bob, and her 26-year-old mentally handicapped “special child” Susie live in a constant state of fear, not knowing when the county sheriff will show up to evict them and throw all their belongings out onto the sidewalk. The next court hearing on their eviction is at 9:00am on September 12 at the St. Louis County Courthouse.

Hundreds of supporters have responded to the following action alert, calling and emailing Freddie Mac in support: http://occupytheauctions.org/wordpress/?p=3983

Missourians Organizing for Reform and Empowerment (MORE) believes that Missouri is positioned at a unique intersection of social, economic and environmental injustice. We believe that as corporate power continues unabated expansion and the gap between the rich and the poor widens, there has never been a better time for our low-income communities to come together and fight back. MORE seeks to be a powerful organization of low- and moderate-income people, building strength in our communities. We work in relationship with other organizations pushing our allies to engage in creative direct action with us to foster good policy changes. MORE seeks to be part of a movement that cuts across, class, age and race lines that is envisioning and building the world in which we would like to live. Web: http://www.organizemo.org

For updates, photos, and for this release on the web: http://occupytheauctions.org/wordpress/?p=4466