Update as of June 30: A few dozen protestors at the Wells Fargo bank branch at 22nd and Mission Streets demanded a foreclosure moratorium, fair deal loan modifications for our foreclosure and eviction fighters, and negotiations with Wells Fargo on their loan and foreclosure policies. ACCE and Occupy Bernal decided to protest at the bank branch instead of Wells Fargo executive Alfredo Pedroza’s home because Wells Fargo has opened the door to meetings for negotiations. Thanks to everyone who participated! 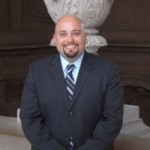 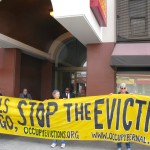 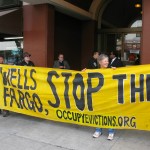 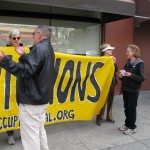 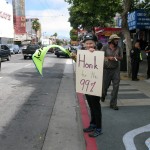 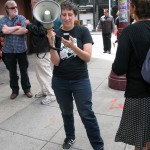 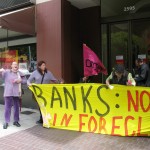 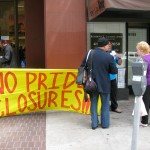 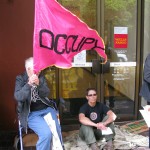 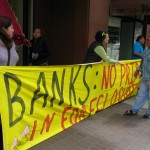 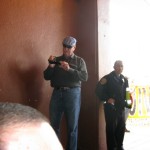 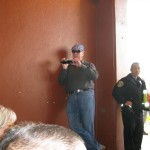 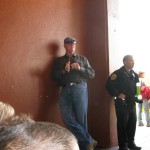 Update as of June 29: Please join us for an action at 11:00am on Saturday, June 30, at the Wells Fargo bank branch at 22nd and Mission Streets in San Francisco.

In response to our letter to Wells Fargo reps (just below), Wells Fargo has offered to meet with ACCE and Occupy Bernal to began a conversation/discussion/negotiations regarding:

Wells Fargo is assembling a team of decision makers to work with us and to begin meeting in the next week or so. As a result, we have postponed – not canceled – the action at Alfredo Pedroza’s home.

If Wells Fargo enters into substantive and productive negotiations with us on these issues, we will consider halting actions against the bank as long as it remains productive for our foreclosure and eviction fighter members. We will resume actions in the event negotiations break down. We reserve the right to renew our action campaign on other aspects of our foreclosure demands, even if we reach an agreement with Wells Fargo on the above issues.

We regret that it has taken escalating protests to the point of appearing at your doorstep to open up the possibility of meeting with ACCE and Occupy Bernal to obtain a negotiated settlement on the issue of Wells predatory residential foreclosures and related auctions and evictions.

You have requested that we call off the protest at your home.

Because many of us are Wells Fargo customers, we recognize in your response the range of emotions we felt when Wells came to our door – fear, despair, shame, and anger — as well as the strong drive to protect our families from Wells’ attacks on us.

We understand how you may have similar feelings about unwanted messengers appearing at your door.

Therefore, we have agreed that, if you meet the following conditions, we will call off the protest at your home:

1) A pause on all further enforcement actions (new foreclosure filings, foreclosure auctions, and foreclosure evictions) for those Wells customers working with ACCE and Occupy Bernal until January 1, 2013, when protections afforded by the California Homeowner Bill of Rights will likely go into effect.

2) Provide a date, time, and location for the first of a series of meetings to negotiate on Wells’ policies related to foreclosures and related auctions and evictions which must include:

a) Negotiations on Wells policies regarding foreclosures and related auctions and evictions, as well as individual cases of Wells customers.

b) At least one Wells management representative capable of taking decisions on individual Wells foreclosure cases, such as loan modifications, including principal reduction, etc., present at every meeting.

d) The meetings may take place at a neutral location with any costs associated with providing the location to be paid by Wells.

e) If negotiations extend beyond January 1, 2013, then the pause on enforcement actions will continue until after a 10-day written notice period provided to all meeting participants of any breakdown in negotiations.

f) If no press are permitted at negotiations, then a summary of negotiations to be provided within 24 hours after each meeting to inform Wells customers working with ACCE and Occupy Bernal of the progress made during each meeting.

We are hopeful that negotiations with Wells will lead to responsible banking practices that treat customers as community partners to keep as neighbors in their homes, rather than as human ATMs for cash withdrawals using a greedy waterfall strategy to extract as much money as possible from them.

Update as of June 26: After a hold pending negotiations with the Mayor of San Francisco and Wells Fargo regarding a foreclosure moratorium, little was accomplished other than continued postponements of bank sales of homes. 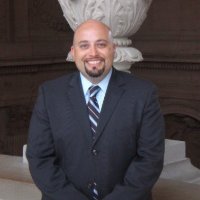 What: Tell Alfredo Pedroza to

Where: Meet at Wells Fargo bank branch at 22nd and Mission Streets in San Francisco

Since June 2010, Alfredo Pedroza has worked as the Director, California Local Government Relations, at Wells Fargo Bank. In this position, he has negotiated on behalf of Wells Fargo to continue foreclosures of our neighbors’ homes.

We call on Alfredo Pedroza to demand that Wells Fargo immediately put in place a moratorium on residential foreclosures until passage of state and federal protections for homeowners and renters, such as the California Homeowner Bill of Rights proposed by State Attorney General Kamala Harris, are passed.

In addition, we demand that Alfredo Pedroza work with Wells Fargo to halt the foreclosures of our San Francisco neighbors (and others in their situations) to give them fair deal loan modifications so they and their families can remain in, or return to their homes: